Gold nanorod forms the key component in a PLASMONIC SWITCH, which is crucial in solving the size-compatibility problem and merging electronics and photonics at the nanoscale. 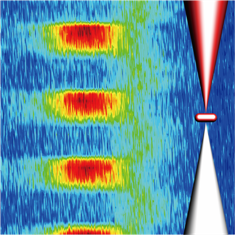 Plasmonics has drawn an increasing attention from the global electronics industry owing to its potential in the development of nanophotonic circuits. Conventional photonic components are typically at the micrometer scale, while electronic elements have reached the nanometer scale in size. These two different size scales have made it difficult to merge electronics with photonics to further improve the performance of the former. Nanoscale photonic circuits will be crucial for solving this size-compatibility problem. A novel and recent example is the PLASMONIC SWITCH. By taking the advantage of resonance coupling between single gold nanorods and photochromic dye molecules, one can readily control the plasmon resonance properties of the gold nanorods, thus achieve the objective of a PLASMONIC SWITCH.

Gold nanorods with suitable width and aspect ratios can absorb strongly in the NIR region, due to their localized surface plasmon resonance. This characteristic of gold nanorods enables them for an intriguing application, which is the plasmon-based photothermal therapy. The photothermal conversion efficiency is an essential parameter in practically realization of this technique. However, the photothermal conversion efficiencies of gold nanorods are strongly dependent on their morphology, for example, the aspect ratio, width, particle volume, shell coating and assembly. 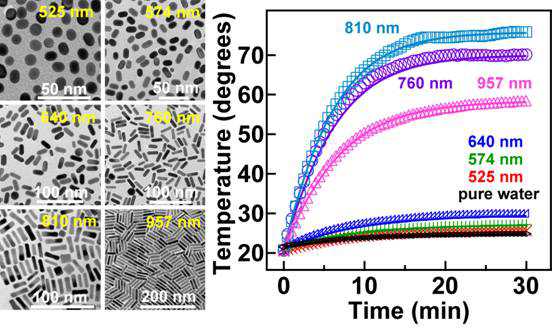 This figure shows six different gold nanorods samples which have the sample widths but different aspect ratios. The sample that has the localized surface plasmon in resonance with the illuminating laser 808 nm in wavelength reaches the highest temperature.

Localized surface plasmon resonances of gold nanorods are powerful in enhancing a variety of linear and nonlinear optical signals and photo-related processes. The plasmon-induced concentration of light onto the regions adjacent to gold nanorods can be utilized for enhancing the light scattered from dielectric particles or biological structures. By decorating a layer of gold nanoparticles onto the hollow silica microsphere, the scattering intensity of the microsphere can be enhanced up to 100 times. The scattering enhancing region can also be tuned by using gold nanoparticles with different localized plasmon resonances. Such an ability of gold nanoparticles could be utilized to enhance the scattering signals from biological cells in light scattering spectroscopy as well as improving the harvesting efficiency in solar cells.

We're not around right now. But you can send us an email and we'll get back to you, asap.